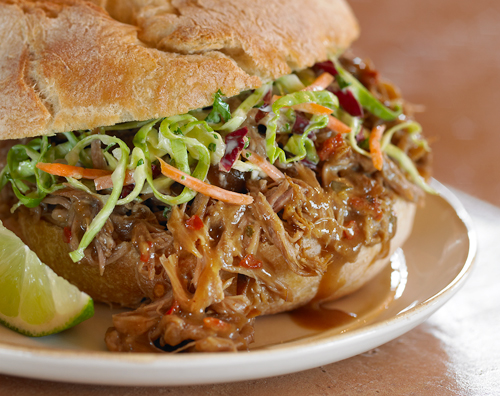 Joe, Heather and I attended the Fancy Food Show recently and were tempted by all the tantalizing new flavors and products. Rubs, marinades, spice blends…FLAVOR was everywhere! A particular standout were the offerings from Saucy Mama, maker of marinades, dressings, sauces and mustards.  We sampled some of their popular items such as Lime Chipotle Marinade, Sesame Ginger Dressing, Cracked Pepper Marinade and Chipotle Mustard to name a few.  They were all chock full of zest, spice, and character.

Saucy Mama’s motto is Make Every Meal Extraordinary, and  that is just what we decided to do.  We took Saucy Mama Lime Chipotle Marinade, combined it with pork, barbecue sauce and brown sugar, tossed it into the  slow-cooker and created a fantastic Pulled Pork recipe.  It is a little bit sweet, a little bit sour and a lot spicy hot!!!

– Remove pork from slow-cooker. Using a knife and fork, pull meat into shredded pieces.  Place shredded meat back into sauce in slow-cooker and stir. Keep warm until ready to serve.